All three of the EU-28 which failed to meet their Renewable Energy Directive indicative targets are from North West Europe: France, Luxembourg, and the Netherlands. These three also failed to meet their indicative trajectories set in their National Renewable Energy Action Plans. Heating & cooling accounts for 50% of the EU’s total energy consumption but, at present only 19.1% of this is sourced from renewables, while in 5 countries out of 7 in North-West Europe the same ratio is below 8.2%. This makes heating&cooling an obvious target sector for efforts to increase the share of RES. Governments in NWE are increasingly considering the phasing out of the currently dominant gas infrastructure. For these ambitions, district heating is a possible solution that can offer a range of benefits, such as improved energy efficiency, simplified building operations and decreased costs, storage capacity for thermal energy, and most importantly fuel flexibility allowing for effective integration of renewable heat sources. While district heating is widely used in North Europe and Central and Eastern Europe, with market shares often greater than 50%, at the level of the EU the share of district heating is 9%, and only 5% in NWE, indicating a large growth opportunity for the sector.

D2Grids is an Interreg North West Europe (NWE) project lasting over 3 years (2018-2022) which aims at increasing the share of RES used for heating & cooling to 20% in NWE 10 years after the project ends, through accelerating the rolling out of a proven but underutilised concept: 5th Generation District Heating and Cooling (5GDHC). 5GDHC is a highly optimised, demand-driven, self-regulating, energy management system for urban areas.

D2Grids will reach its goal by developing a generic technology model and product standards to lead to the industrialisation of the system, by boosting commercialization potential of 5GDHC systems through presenting solid business plans and attracting investors, by developing training modules and courses to develop a skilled workforce for 5GDHC technologies, and by demonstrating the technology through impactful pilot investments in Bochum, Brunssum, Glasgow, Nottingham, and Paris-Saclay. 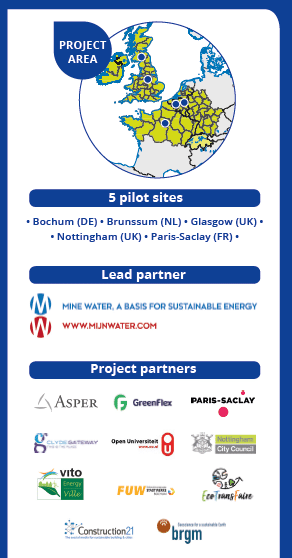 By promoting 5GDHC standards towards the industry and attracting investors, public authorities and project developers will be empowered to implement new 5GDHC investments and to modernize existing DH networks. Therefore, this online 5GDHC Platform has been established to ensure knowledge sharing, exchange and interaction among key target groups:

Finally, it also holds tools created within the project: